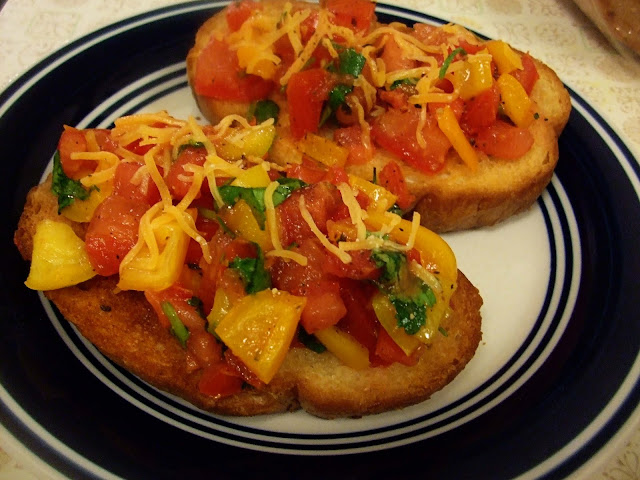 Bruschetta!
I relocated to a new land, far away from my home, a place for the wild n' free..AMERICA. I’m here as a graduate student dealing with the crucial transition phase of my life. It wasn’t great in the beginning though, but later it started getting exciting to me. Initially I thought, living in Springfield, Missouri is going to be really tough, because it isn’t what I expected. I was taken aback when I realized that there wasn’t a single Indian grocery store. And secondly, this place is very quiet with its slow lifestyle, unlike the buzzing New York or L.A which is very untypical for America. But then I realized, I am fortunate to be here, the people are lot nicer here. Yes, I had rude experiences in Chicago! This place is pollution free, traffic free, safe and secure. The only big disadvantage is killing time here! I overcame that too now. I’d been to Branson, a place for value shopping and recreation. I also made a trip to Kansas city-Enthiran movie and Indian food made me feel like India. For the fall break, I was in Eureka Springs, Arkansas- A town on a hill top depicting the Victorian age with its pretty houses, and cute little shops! Classes are like sometimes fun and sometimes boring L Rest is so far so good!
Coming to Food part, I really didn’t have trouble cooking for myself. But cooking for two of my male friends, it is. They aren’t so outrageous like me to try something non-Indian. Lately, I made Bruschetta and compelled them to try it out. And it turned out to a big surprise to me that they liked it so much and they keep asking me to make it again. The idea of Bruschetta was inspired from the movie Julie & Julia. Many food addicts like me, would have seen that movie and were drooling when Eric was gorging on Bruschetta. Ever since I saw that scene, I was like in real urge to replicate it at home.
So here’s how I did mine..
Ingredients :
1 loaf of bread,sliced
3 to 4 bell peppers(yellow & red)
2 large heirloom tomatoes
2 or 3 leaves of basil
Salt & ground black pepper
1 Clove of garlic
Olive oil
Shredded cheddar cheese 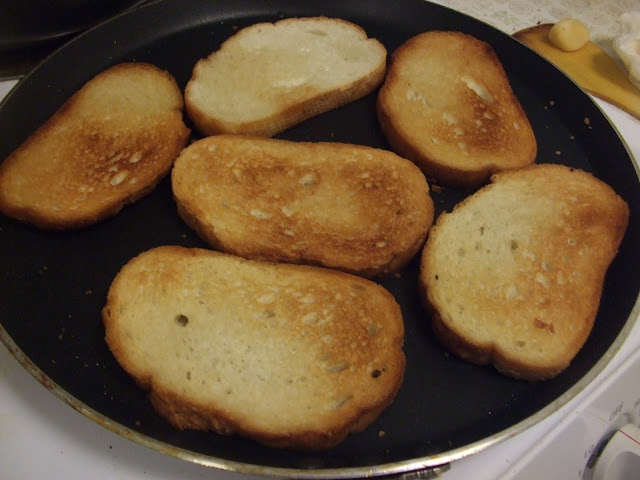 In a frying pan, drizzle olive oil liberally. Once it got heated up, place the bread slices and let it brown slightly.
Turn around. And brown on the other side too. 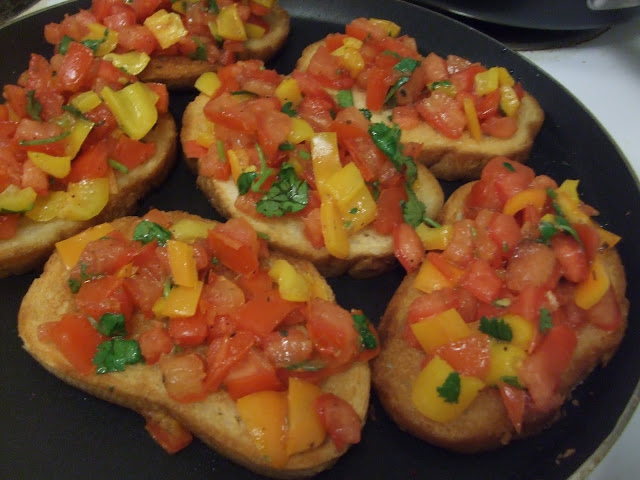 Place spoonfuls of the tomato mixture on each slice of bread. 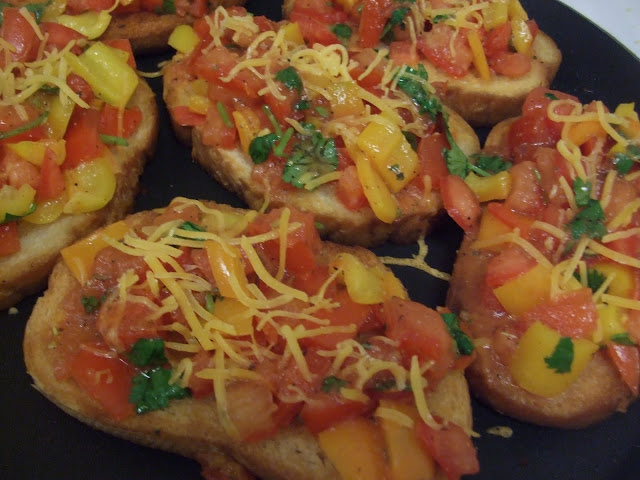 Sprinkle some cheddar cheese and serve immediately!
Pin It
Posted by Unknown at 6:16 PM